Impaction Colic: What You Need to Know

Colic is a catchall term used by horsemen to describe equine gastrointestinal distress, but there are several different causes. Impaction colic is one of the most common types, and fortunately it is also quite treatable when caught early. Understanding the contributing factors, symptoms and treatment options can help better prepare equine caretakers who encounter this condition.

An impaction occurs when a large amount of firm, dry fecal material has built up within the intestine; this bolus is then unable to change size as it passes through the varying widths of the digestive system. Impactions occur most often in the large colon.

“There are several locations in the large colon where the diameter changes from big to small,” explains Treasa Bryant, DVM, an intern at Myhre Equine Clinic in Rochester, NH.

Colic is largely a disease of domestication, and there are several factors which predispose any horse to colic, including lack of exercise, being stalled instead of living at pasture, and being fed a few, larger meals during the day rather than free grazing. But for an impaction, there are two additional contributing factors: horses that are not drinking enough water, which is especially common during cold temperatures, and consuming poor quality forage which is more difficult for the horse to break down.

The equine digestive system is extremely long—almost 100 feet—and is compressed into what is, relatively speaking, a rather small amount of space. This means that as food passes through its entire length—mouth, esophagus, stomach, small intestine, cecum, large colon, transverse colon, small colon—it must make its way through numerous twists and turns. 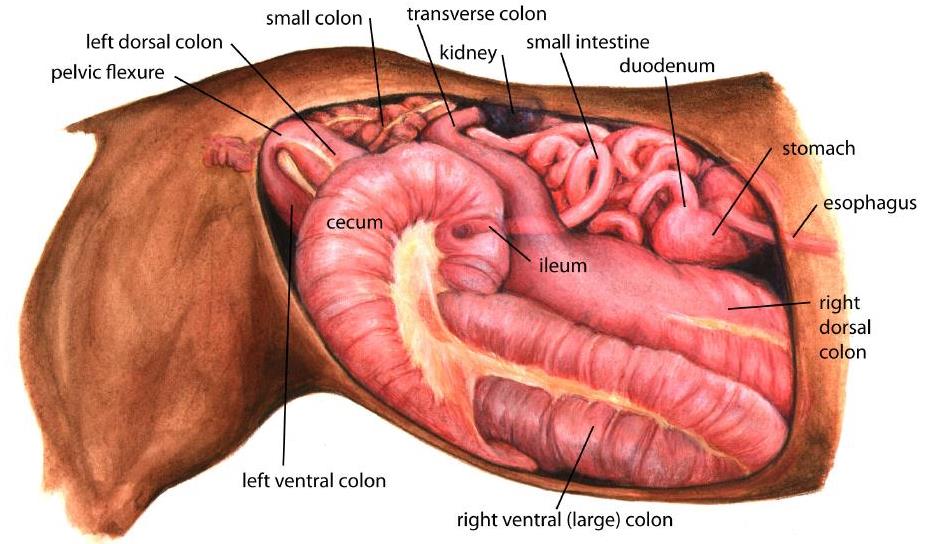 Bryant describes the large colon of the horse as being shaped like two horse shoes stacked on top of each other, connected by their left heel. “The large colon starts on the right side of the horse at the lower abdomen, then extends all the way forward to the sternum, and then the first horse shoe ends on the left side below the flank. This is the pelvic flexure.”

The pelvic flexure is one of the most common locations for an impaction to occur, because at this point the large colon does a 180 degree turn; a large bolus of dry fecal matter can easily get stuck. Fortunately, it is a location which veterinarians can usually feel on rectal exam, making diagnosis easy.

The rest of the large colon is essentially laying on top of itself. From the pelvic flexure, it extends from the upper left flank to the diaphragm in the front of the horse, then attaches at the top right portion of the right flank. It is here where the large colon connects to the transverse colon, which is the second most common location for an impaction. It is much more difficult for the vet to diagnose an impaction here because it is located farther forward within the abdomen and is not possible to palpate.

Symptoms of an impaction colic usually come on slowly and can be mild and intermittent, meaning that it can be easy to miss them altogether. “An owner goes out to feed, and their horse is not too interested in food,” says Bryant. “The horse is given a dose of Banamine, the symptoms go away.”

But every time the gut tries to compress the impaction to get it to move, the lining is stretched and the horse experiences pain. So the process becomes cyclical—periods of discomfort followed by periods of relief. And worse that that—if the horse has been made to feel better through the use of medication and has still been offered feed, then the size and pressure of the impaction will only build. “It is like a clogged drain,” Bryant explains.

As the cycle continues the horse’s pain level will increase, and other colic symptoms, including flank-biting and kicking, are likely to occur. In extreme cases the horse may appear bloated. “We won’t get that until the whole colon is affected,” Bryant notes.

The first two steps will help to resolve the impaction itself. “We provide fluids via nasogastric tube directly to the gut,” says Bryant. “We are trying to rehydrate that big, firm food bolus.” Electrolytes are often added as well to help pull additional water into the gut.

Mineral oil, also administered via nasogastric tube, will coat the food bolus, making it easier for the horse to pass. “Some oil will also get into the bolus and help break it apart,” Bryant adds.

Banamine is the preferred medication for a mild to moderate impaction, administered at an appropriate dosage once every twelve hours. It is important to address the horse’s pain because pain causes the gut to stand still. But some horses’ pain does not respond to this protocol. This is referred to as “breakthrough pain” and indicates that a horse most likely should be referred to a veterinary hospital or clinic.

The next step up for pain control is butorphanol, Bryant adds, a morphine type drug, administered intravenously. The additional advantage to hospitalization at this point is that a horse in extreme pain is unlikely to be willing to drink; IV fluids can be administered to improve overall hydration levels. In extreme cases, pain relieving drugs can be mixed at a continuous rate into the IV fluids.

One of the ironies of an impaction is that the horse’s pain level is likely to increase before it gets better—but this is actually a positive sign.

“When a sponge absorbs water it gets bigger,” explains Bryant. “The bolus will cause more pressure on the gut as it starts to break up. The level and duration of the pain depends on the size of the impaction.”

To confirm that an impaction has fully resolved the veterinarian may perform another colic exam. If the impaction was severe, this process may be done several times. The passing of fresh manure is a positive sign, as is evidence of mineral oil. It is only safe to start feeding the horse again once the veterinarian is confident that the impaction has been cleared. Bryant suggests starting with mashes to keep water intake high, as well as adding corn or vegetable oil.

“When re-feeding a colic we start with a low bulk food, like equine senior, which is a complete feed, and forage extender soaked into a mash,” says Bryant. “This will get short fiber into the horse and gets the gut working again without overloading it.”

If the horse remains comfortable after 24 hours small handfuls of hay can be introduced. Small, frequent meals are the key—4-6 meals per day, with 1 to 2 cups total mash feed per meal, as long as the horse is continuing to pass manure.

“Over the next three to five days, you can increase the amount and decrease the frequency,” says Bryant. “It varies a little from horse to horse, but the most important thing is that the horse is still passing manure.”

Despite a horse owner’s best efforts, colic can occur in nearly any horse and potentially be life threatening. The horse’s best chance at survival comes with prompt recognition of the symptoms and following veterinary advice, even for a colic that might seem minor.

*All content is for informational purposes only. Contact your veterinarian if you have any questions or concerns about the health of your animals.

Christina Keim is a self diagnosed equine addict who has been around or on top of horses for a nearly uninterrupted span of over thirty years, when she was first given riding lessons “just for the summer.” She has enjoyed and experienced many disciplines including hunters, equitation, jumpers, dressage, eventing, Pony Club and most recently competitive trail riding. Christina is based at her Cold Moon Farm in Rochester, NH, and holds an M.Ed. from the University of New Hampshire.

Horse Digestive System Working over poles to even out the gait