A Helmet Saved My Life

So, six months ago this was me.

(Warning, the next photo might be a bit unsettling. No blood, just very broken bones. Also, cursing ahead.)

THANK GOODNESS I was wearing a helmet. I very well might not be here today if I hadn’t!

The Accident happened while I was riding at home on a horse I never thought would hurt me—she was too kind and had never unseated me. Did you know you can keep your seat even while in the air and with a horse on top of you? Yup. #helmetsavedmylife 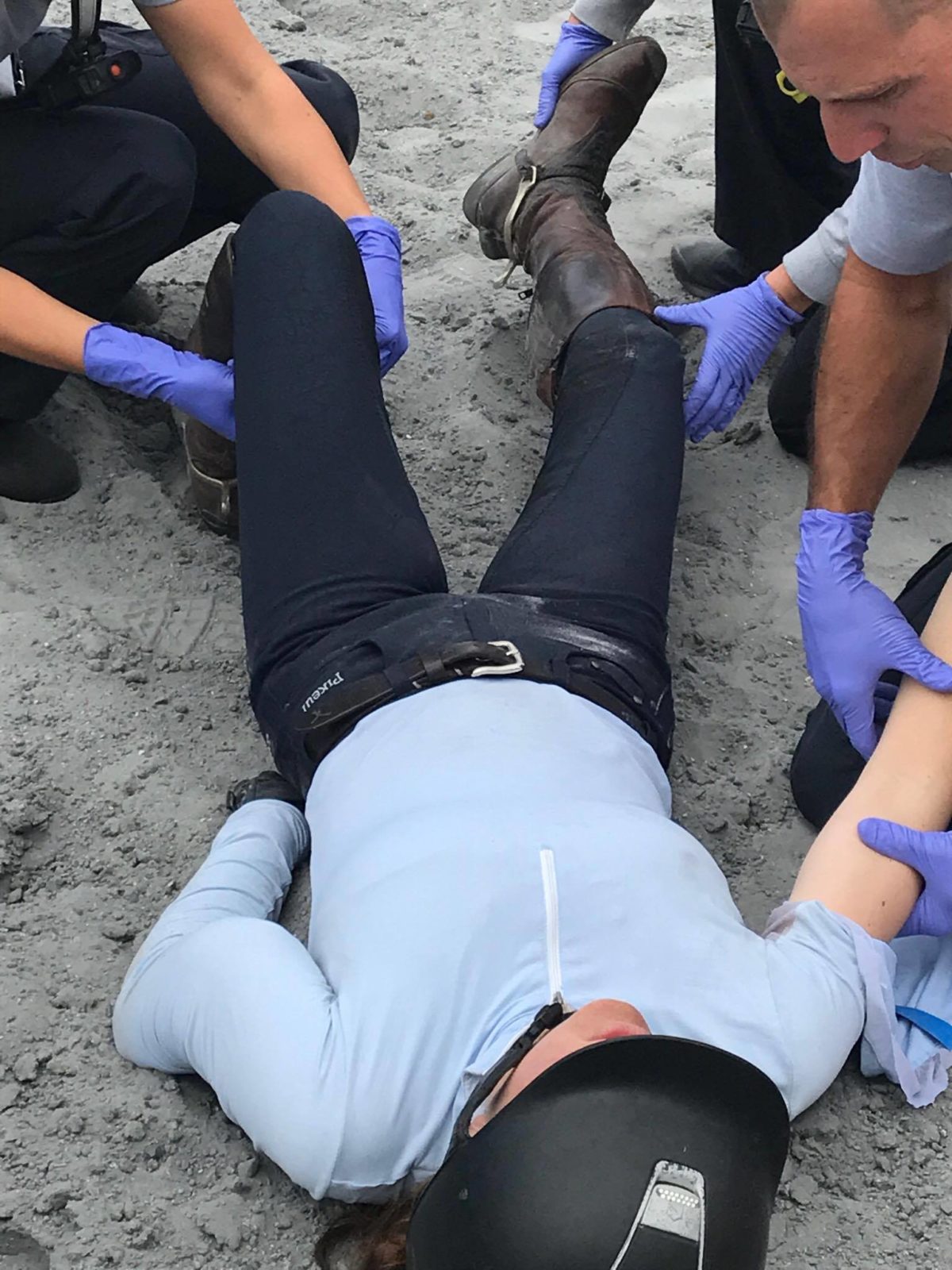 In that moment, lying there on the ground, I thought that I might not make it. That this was it.

Then I started breathing again (I did have a very minor collapsed lung) and realized I was alive. I “yelled” (so I thought, it was more like a croak) to my boyfriend that “I can’t move…call an ambulance” and then immediately asked for my horse—all that mattered from there was that she was okay.

Sorry for the language… Like I said, I’m just happy to be alive.

I ended up being air lifted by helicopter to St Mary’s Medical Center, a level one trauma center. I later joked that it was good thing that I wasn’t at Delray since that’s apparently where they take you when you’re going to die.

The paramedics gave me all the morphine they could before moving me, but it was still agonizing being lifted for the stretcher. I was lucid for the flight. I could recite the address, my mom’s number, how to get my boots off, exactly what was injured, what happened—everything. But I was super freaked out about the helicopter ride. I’m afraid of heights. I kept trying to ask the medics if they would hold my hand but they couldn’t hear me, so they thought I was in pain. Oh yeah, and they were kinda hot (maybe it was the drugs).

So there’s me, strapped down to a backboard in my undies (they cut my shirt and bra cut off) begging one of these hot dudes to hold my hand. Not awkward or anything. After that I got super loopy and started yelling creative obscenities.

The following day I had surgery on my arm. The physician’s assistant (PA) told me it would be three months before I could ride again. At the time, that seem outrageous. I said, “Absolutely not, I have to ride sooner than that.” I think I scared him because he was like “Well, we’ll see what the doctor says when you come back…” 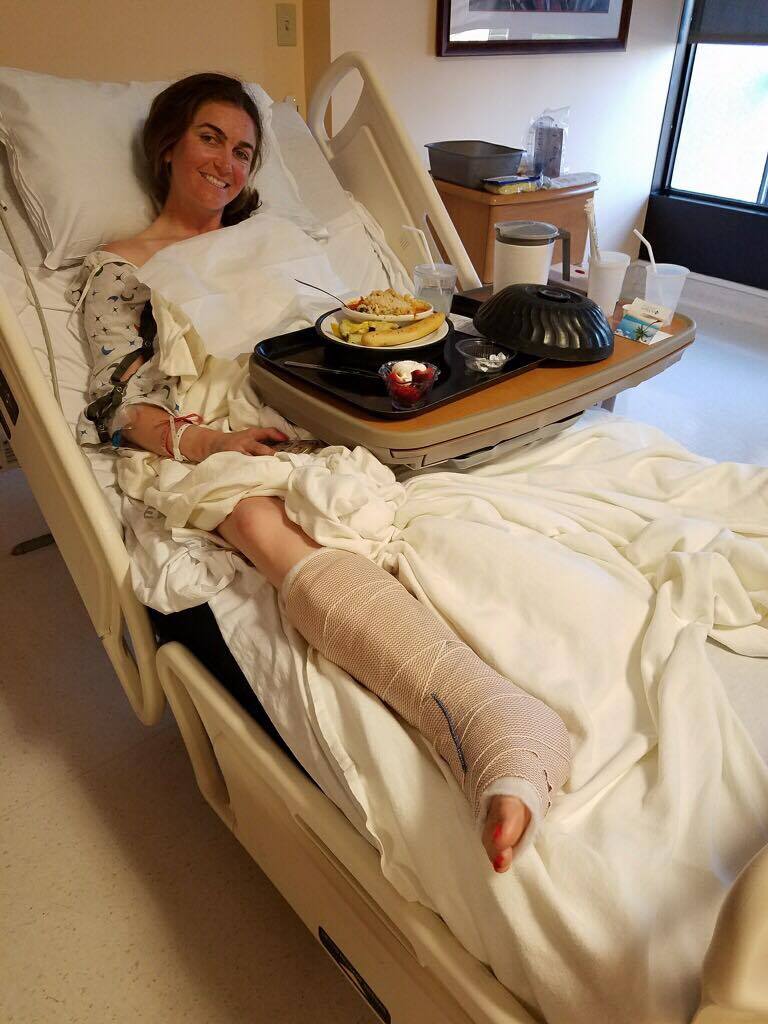 Four days later I was released from the hospital and basically wheelchair bound. I wasn’t a shy person before this experience. But after being naked in a helicopter with hot medics and having to use a bedpan, I’m pretty sure I had no dignity left.

The PA was right, it was at least three months before I was able to ride again. The accident happened on April 20th. I didn’t get back on until July 12th and didn’t really start riding again until around July 20th. Thankfully, once I was in the saddle again things started coming back quickly and I was able to show in early August.

In September, only five months after my narrow escape from the Grim Reaper, I showed three horses in four championship classes at Regionals, qualifying two for the US Finals. Six months later, I’m preparing an Intermediate 2 horse for his Grand Prix debut and a Grand Prix horse for his third US Finals!

It’s amazing how much has changed in six months…

It’s even more amazing how much can change in one moment, one ride.

That’s one of the things I can’t get over. How earlier that day I was on the phone (on horseback) making plans for the following month. How I was on my last horse at that barn and I was about to head out to a lesson at another barn. How I didn’t ride that particular horse with my phone in my back pocket because I had put it on the charger and, had it been there, how it surely would have led to even worse injuries. How my boyfriend almost left before that ride but I talked him into staying because I wanted him to see how well my young mare was going.

It all changed in an instant—so cliche, but so true.

It’s a universal truth that if you’re going to ride horses, you’re going to fall off horses. You just never know when a young horse, or any horse really, is going to overreact or when their antics might cause them to lose their balance and fall. It’s the reason I always ride in a helmet.

But the accident really drove it home for me.

It’s unsettling to still see so many people (mostly professionals) not wearing helmets, and having the gall to post pictures and video on social media without helmets.

Yes, to each their own. Yes, your safety, your call. Yes, this is my opinion.

But take this into consideration—if you are a professional, there is likely more than one rider out there who looks up to you.

They want to be like you. Ride fancy horses like you. Look pretty on a horse like you. Get good scores like you. So they wear the same breeches, or ride in the same saddle. If you’re sponsored by a company, they buy that product. You subtly influence the actions and decisions of others because you, a professional, are a public figure in our industry.

So when professionals post videos to YouTube where they’re riding without a helmet, it’s inevitable that someone is going to watch and think “Oh, so-and-so doesn’t wear a helmet, so it must be ok, I don’t need to wear mine.” Or “Oh, so-and-so doesn’t wear a helmet and they look so cool while they ride, I want to look like them so I won’t wear mine.”

Guess what? That person was subtly influenced by you to make a decision that puts them at risk for serious injury—even death. Not cool.

Helmets are like cigarettes and seat belts. Sure, you’re taking your life in your hands and risking your own safety. You might think you’re not hurting anyone else, so it’s no one’s business but yours. But that’s not the case. You indirectly hurt others.

Take it from a trainer who is grateful to be alive. Stop the madness. Wear a f***ing helmet. #StrapOneOn